I debated when and if I should post this. I felt like I needed time to grieve, however I cope by writing.  This blog originally started out as an outlet for me when I was first diagnosed with PCOS. I never anticipated that it would turn into a comfort for many people and  introduce me to a community of badass ladies.  This blog has changed my life and for that I decided that I would bite the bullet and write about my miscarriage.

April was a bust. To say I was disappointed was an understatement, however I knew that the chance of getting pregnant on the first round of full treatment was unlikely.  When we started this month’s round I felt a bit more hopeful. A cyst that had given me trouble in March into April had disappeared and I was feeling better with the medication this time.  When I went in for my first ultrasound they saw not one, not two, but three eggs. I was speechless. My doctor had a “special” conversation with me about what would happen if all three eggs actually matured. She went on about the health risks of multiples and my options. She didn’t think all of them would mature but she wanted to be cautious.  The next week I went in for my second ultrasound and two of the three follicles had matured. They asked me if I still wanted to do the trigger shot to which I responded “Hell yes I do!”  In my mind the worst case scenario was I didn’t get pregnant, and the best scenario was I got pregnant. I didn’t care if it was one or two babies. I knew that I could handle whatever was thrown at me. The nurse assured me that my chances of getting pregnant were doubled and we hugged and giggled as I left the office. (My nurses rock by the way.)

Fast forward to two weeks later and I felt seriously depressed. I knew I was going to start my period. I just knew it. I was cramping, tired, and sleepy. It was frustrating and I didn’t feel like myself. I started seeing a counselor about my infertility because I was sure that was why I was depressed. The night before I was supposed to go back to the specialist to have my HCG test, I bought a home pregnancy test. *two weeks after the trigger I have to go in for lab work to check my hcg. *  I knew it would be negative, but for some weird reason I needed to see the negative test. I needed to prepare myself so I wouldn’t cry in the doctor’s office or at work the next day. I wanted to act casual about it all. After dinner, I went and peed on the stick and screamed when I saw it…. 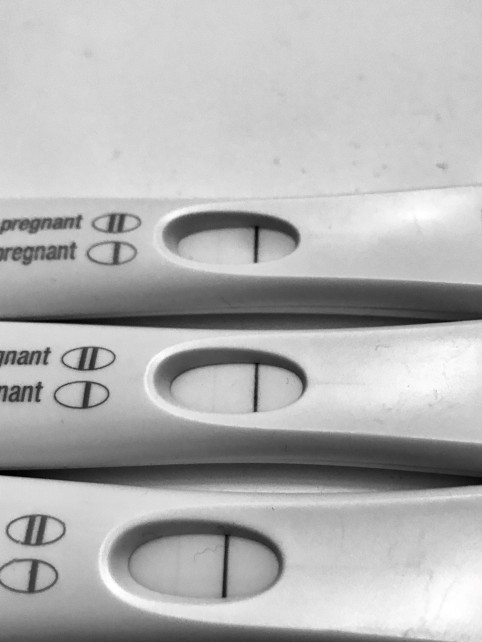 I screamed and ran into the living room to Josh. He was in the middle of fixing something and had his toolbox spread around the room. I immediately dropped to my knees and began laughing as I pushed the test into his hands. ” It’s positive. Oh my God it’s positive!”

Casually,  he said “I don’t know that line is pretty faint.” After about a half an hour of us staring at the test in different lightings, settings, and under a magnifying glass we were convinced.

We were finally pregnant.

I took 4 more tests and brought them into the doctor’s office with me the next morning. I carried them around in my purse and my nurse laughed. When I showed them to her she said “Yep! These are positive!” She took my blood and two hours later, confirmed I was pregnant.

I couldn’t wrap my head around it. She then told me my hcg was low so they wanted me back in 48 hours to make sure it was doubling. She told me not to worry that it was just probably very early. (4 weeks in fact.) 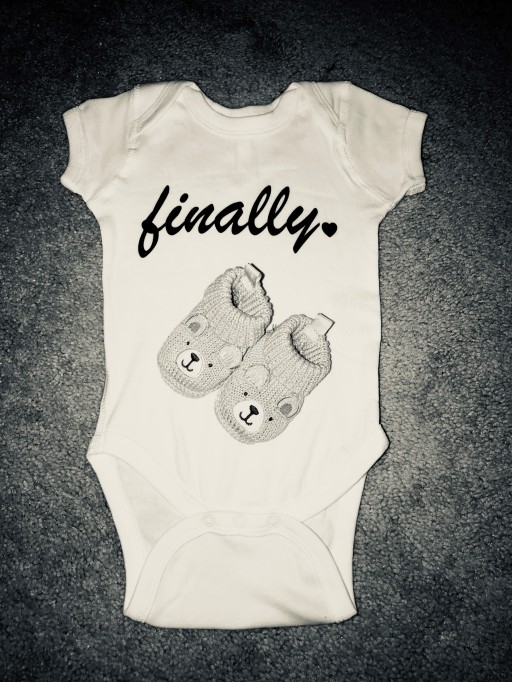 I can’t explain the joy I felt for the next two days. My dream had come true. I was a mom. This time instead of crying tears of sadness, tears of joy streamed down my face.  For the first time in a long time, I felt pure gratitude. My struggle felt worth it. We thought about how we would tell everyone. With mother’s day right around the corner, Josh and I decided we would surprise our mom’s on that day with the news. I imagined my mom’s face as she has been one of the most amazing people during this infertility journey. Other than Josh, she has been my rock and without her I wouldn’t be able to go through it with the strength I have. I imagined us crying and hugging, however I thought it would be out of joy and excitement.

Thursday afternoon, after my blood work, my doctor called.  I don’t remember a lot about that moment other than that I felt numb. I couldn’t believe that after only 2 days, my dreams were being ripped away from me.  I listened as she apologized and told me

“you probably wouldn’t have known”

“at least we know you can get pregnant, which is a step forward even if it doesn’t feel like it.”

When I realized she stopped talking all I could say was “this is a joke.” She apologized and told me it wasn’t a joke. I quickly thanked her and told her I would take off some time before I started treatment again. She understood and told me to call her on cycle day 35. I was at work when this happened and immediately told my boss I needed to go home.  I didn’t let myself cry until I got to my apartment and immediately called my mom. 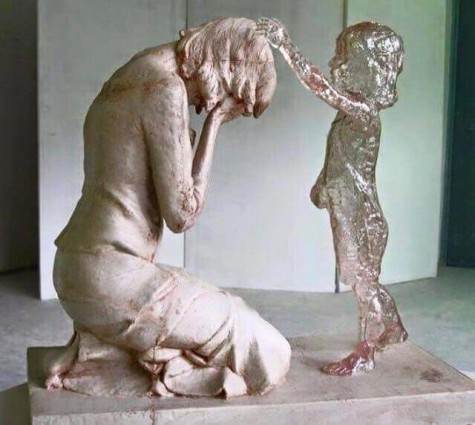 Two days later I was on an airplane, in the middle of a miscarriage, on my way to visit my  hometown. It was the day before Mother’s Day.  Josh had planned this visit several weeks before when I was feeling homesick. When I saw my mom, we hugged and cried.  Honestly, if I hadn’t gone home to see my family I don’t think I would be able to function. It was healing to see my mom, my grandma, and those members of my family that have been in my shoes. It made me realize that I’m not alone. But it also gave me the opportunity to see that even though life can be a huge shit storm, I am surrounded by love.

I was only 4 weeks pregnant when I miscarried, but I was pregnant. After almost a year and a half I finally got pregnant. I say that sentence to myself out loud almost every day. It validates what happened, but it also gives me hope. I didn’t know how long it would take me to get pregnant. I didn’t know if I would get pregnant. Everything was a question mark until that moment. I read blog after blog and article after article about what my doctor called a “chemical pregnancy.” All of them said the same thing:

There was a live body of cells inside me and no one can ever take that away from me. For two days I carried life and even though the pain of loss is unbearable sometimes, I still hold the gratitude in my heart that I was able to conceive. 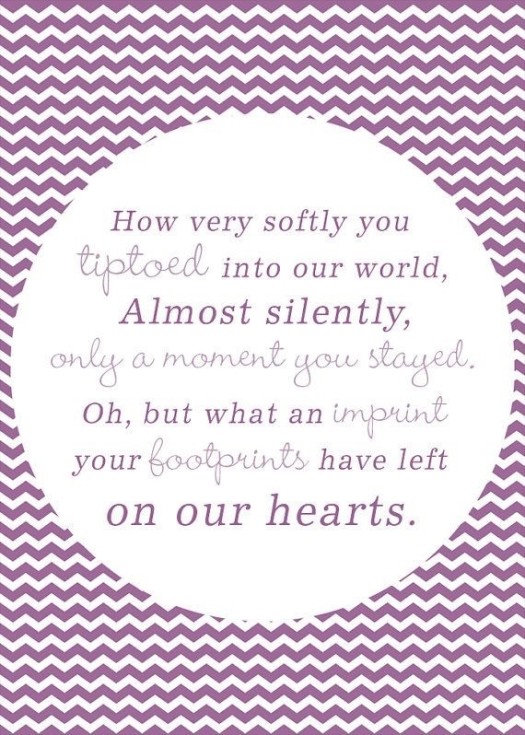 To close this chapter of our journey, we decided to name the baby Amory. It’s celtic for brave. We are hoping to plant a special flower pot for him/her this Summer in our garden so we can always look at it and remember that there is hope. It’s coming. We just have to endure the storm. We have to be brave. 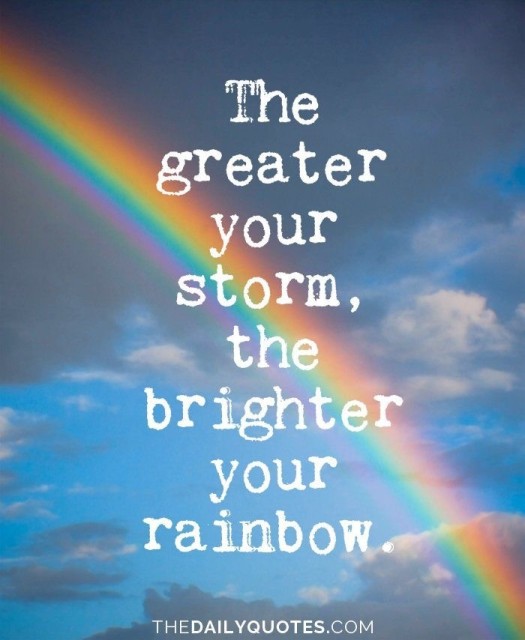