The following is a blogpost from my dear friend Jenny about her experience with depression and fertility treatments.

The Day I Yelled at the Worcestershire Sauce

Infertility has consumed me. Again. And taken such a heavy toll on all of us emotionally and mentally.

Trying to get your body back into a good groove after a loss is a slow, painful waiting game. Sometimes it just really sucks to be two weeks late and getting negative pregnancy tests. Like a really mean trick. I am positive (pun very intended) that I have spent more money on Dollar Tree pregnancy tests than I have on makeup or cosmetics. They have a term for my kind. POAS Addicts (peeing on a stick). It’s true and kind of gross, but also pretty funny.

After the dreadful wait, I was finally able to start Clomid again. It was exciting and overwhelming all over again. Even though I’ve done this four times before, the fifth seemed to be just as hard if not harder. There is so much hope, wonder, waiting, fear, doubt, and frustration. But a positive test is no guarantee. At least I won’t let myself believe that. Having a history of losses takes the fun out of a pregnancy. But a positive test is much better than a dozen negatives.

Another round of Clomid didn’t work either. And I am sad. We are sad.

At the beginning of October I started feeling extremely exhausted. I blamed it on a teething toddler that was constantly attached to me. His separation anxiety has gotten even worse, so sleeping has become a constant struggle. He has never truly slept through the night and will be 2 this coming March. A tired house is a hard house.

Thomas and I recently bought and expanded into an entire town home. We’d been living in the basement for 2+ years. While it was doable, it was tight quarters. It was exciting to “move” into a house and get everything organized. I thrive on cleaning, organizing, and seeing the finished product. I had a lot of distractions and plenty of things to keep me busy. I was still extremely tired but just kept writing it off as being a toddler mom with a lot going on.

Things were great! The new house was fun. We got to decorate, get new furniture, etc. I was happy, but I just couldn’t shake this weird feeling. My mind was happy, but my body wasn’t. I ignored it and kept myself distracted with the new house. I loved all of the fun, new and exciting changes. But I was still so, so tired.

And then there were days where I felt like I was having an out of body experience. When I was standing in a room with someone having a conversation, it felt like they were on the other end of a football field and I had someone else’s Coke bottle glasses on. There was a scary disconnect. A big, blurry wall surrounding me. Nothing felt real. I didn’t realize what was going on until I spoke up about it on Thanksgiving day.  I finally called my mom to try and explain this dark, gray cloud that was looming. At one point I even told her that I knew I was talking to her, but it didn’t feel like I was actually talking to anyone. I was just simply existing. Everything was very surreal.

Days were blending and time didn’t make any sense. I was confused about the day of the week and shocked when the clock said 3 PM out of nowhere.

I’ve always been aware of depression, but it had creeped up on me so slowly that I didn’t recognize it until it had completely taken over my everything. 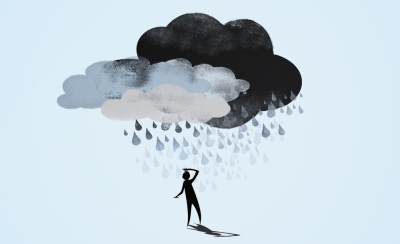 I started asking around and looking into meeting with a mental health specialist, but I had no idea where to even begin. This wasn’t just mommy blues, this was real. My logical brain understood that everything was fine, but my emotional brain was so disoriented. It was so frustrating to recognize this but have no control over what was happening. I talked with my sisters about this very feeling and they knew exactly what I was talking about. It made me feel like what I was going through wasn’t completely crazy and confirmed what I was feeling.

Driving was stressful and gave me anxiety. My senses and reaction time seemed to be off and slightly delayed, so I didn’t trust myself on the roads with crazy Denver drivers. Driving felt like a video game, so I refused to leave the house. I didn’t want to talk or see anyone. I even ignored texts and calls. I got so desperate for sunshine that I took Lincoln on a 15 minute walk in windy and 30 degree weather. (I wasn’t aware of the temperature, but I had bundled us up and we were very warm!)

I told Thomas that I was so scared to leave the house, so I just kept cleaning because I knew I couldn’t mess that up. I could focus on a task and feel accomplished without having to worry about screwing everything up. I was on complete auto pilot. I was only able to do my job as a mom because I was so used to doing it. We were safe and fed, so I was content.

I never, ever had thoughts of self harming or hurting my child, so I consider myself very lucky. I kept telling myself how wonderful our life is and that I should be happy, but I just simply couldn’t.

I tried running up and down the stairs for exercise. Jogging in place. Jumping jacks. I was trying anything and everything I could think of to try and get rid of this feeling. I made lists of things like taking vitamins, eating better, etc. Absolutely grasping at straws.

All I’ve ever wanted is to be a wife and mother. During this low time I had zero desire to get pregnant. Even though we were actively going through fertility treatments, I just simply did not care about getting pregnant whatsoever. And I think that was my first clue toward diagnosing the cause of my sadness.

Speaking up, even before I was full aware of the severity, was the biggest step. I just kept talking myself out of these feelings and expecting to wake up one day and feel completely normal. But it lingered or just got worse. So I explained what I was feeling in the best way I could. It really is hard to put into words what you’re going through when you’re not even sure of what it is.

I started back tracking and trying to figure out when it truly started. I couldn’t pinpoint the exact reason, but a few things made more sense as I tried to diagnose myself:
– Lincoln was sick with a crazy stomach bug in late October, so I kept him quarantined in the house for 5 days straight. Cabin fever.
– My mother in law moved. She was the sweetest roommate and always kept me company when Thomas was working. One of my best friends was gone.
– Lincoln’s sleeping troubles were at their absolute worst (he nursed for 10 hours straight one night. TEN.), so my days were really hard with both of us overtired and cranky.
– We were hosting Christmas this year, so I was in overdrive trying to make sure the house was ready for company.
– Clomid.

The tipping point. I took Clomid to conceive Lincoln a few years ago, but I never had these sort of symptoms. At least I wasn’t aware of them. I think I was already having a bout of sadness before starting treatments, but nothing major. Adding the artificial hormones from infertility treatments was just too much for my body and mind this time.

I reached out to anyone and everyone I could think of that may be able to help. My mom groups and other infertility message boards.

Once I connected the Clomid to these feelings, it started making more sense. And by reaching out I found that others have experienced the same things.

I had no idea hormones could play such a vital part in mental health. I’m glad I know that now, but I wish I’d known that I wasn’t losing my mind and that it wasn’t my fault. The symptoms and side effects of medications are often disregarded or never even mentioned. I know so many women that are going through fertility treatments, so I wanted to put this out there. I wish I’d spoken up sooner, but I wasn’t even aware that I needed to bring anything up. If you ever take Clomid, keep an eye out for any odd changes in behavior or thoughts.

As for the Worcestershire sauce. I knew something was really wrong the day I couldn’t find the Worcestershire sauce and almost completely lost my cool. I remember getting so upset at the sauce. All I wanted to do was make my husband a stupid hamburger, and I was failing. I was slamming cabinets and shoving things out of cupboards. I gave up after a few minutes and just had to laugh at myself. I felt so crazy and it was such an absurd thing to get so upset about. But I did. Just a funny little anecdote on the kind of crazy things hormones can put you through! 😉