For the first time in a couple of months, I’m actually feeling like myself. If you struggle with infertility, you know exactly what I’m talking about.  There are times when you feel so disconnected from your body, that you don’t even recognize yourself. I recently learned that when you are going through hormone treatments your scent changes. When this happens, you literally can’t recognize yourself.

Recently, we introduced injections to our round of medications.  I was not ready for the whirlwind of emotions that ensued shortly after my first injection.  I had already been feeling pretty crummy. March is not ever a good time for me for several reasons. This past March we had 3 Nor’easters back to back. For those of you that don’t know what a Nor’easter is…look it up. It felt like Winter would never end. March is also the month that I lost one of my best friends, so I haven’t been on the best terms with March in several years. On top of all of this, I had a major change at work. It was a great career change for me, but required a lot of training and time. I was emotionally, physically, and mentally exhausted.

When my doctor told me we would be adding injections to our round of treatment from now on, I was numb.  It was just another medication to add onto the pile of meds I’ve been taking for almost a year and a half. She showed me how to inject the medication and told me when I would need to do it.  She administered it to me since it was the first time, and sent me on my merry way. “Baby dust to you!” She shouted as I left the office. They are always so positive.

That night I woke up at 3:30 in the morning and couldn’t go back to sleep. As I laid there in the dark I told myself this was going to be the month. I had recently had several friends get pregnant on their first round of treatment. Why should I be any different? I kept telling myself that if I would just think positive, it would happen. The month had started off rocky, but out of nowhere took a positive turn regarding my fertility. It had to be a sign I told myself over and over.  I obsessed about this for the next two weeks. I swore I was pregnant. I had done everything I was supposed to. I stopped drinking caffeine, and started eating lots of fruits and veggies. I kept calm and didn’t get angry even when I felt nauseous and tired from the injections.  Two weeks after the shot, I took my pregnancy test.  I waited the longest two minutes of my life and then…. 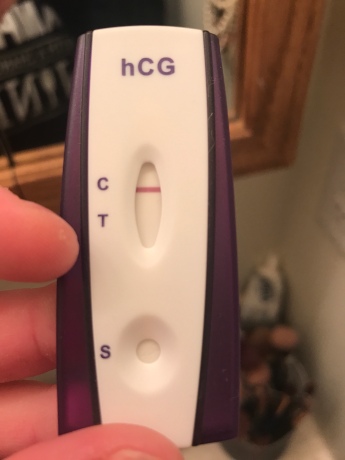 I burst into tears. I had been telling myself for weeks that this month wouldn’t be any different from the past 15 months so I shouldn’t be upset. They had only added one extra med to give me a boost. If it didn’t work, I would try again the next month. I sat on the bathroom floor and cried for a good 20 minutes. I was so angry I pounded on the floor. I had been feeling so sick, I was sure that I was pregnant. However, it was just a side effect of the combination of medications  I was taking.  After this day, I lost myself for a bit. This has happened since we started this journey, but this time was different.

The self-loathing began to creep in.

I felt like not only had I let myself down, but my husband and family.  I felt like such a failure for not being able to do the one thing that is so easy for everyone else. For weeks I left my phone on Do Not Disturb. I ignored phone calls, texts, and invitations to go out. I didn’t want to be around all the happy people.

It wasn’t until I started my period that I felt better. I wasn’t pregnant, and AF was a huge reminder of that but it also gave me something that I haven’t had in a year and a half…

My body was working.

It hit me like a load of bricks when I realized it. My body was working! My reproductive system was waking up and realizing it had work to do! I shook off the fog of self-loathing and depression and stepped on my yoga mat. (Surprised?) I reconnected with myself on the mat, and showed my body the gratitude and love it needed. Finally, I began to feel like myself again. The weather warmed up and so did my heart.

To my sisters and brothers struggling with infertility:

It’s okay to be angry, to be depressed, and to be sad. But don’t let it take over your life. Although it sucks and is unfair, life is so beautiful. There is so much to be thankful for.  Remember to love yourself and when life is hard, love yourself even harder.  Find the good in your day and celebrate the small victories. Because even though things don’t go as you planned them, they always work out the way they’re supposed to in the end.

2 Replies to “When Things Don’t Go As Planned…”